We had another very late start to the day this morning. It’s always a double-edged sword when we get up late. On the one hand we do have a nice lie in, but we also tend to be quite lethargic and slow to get going as a result. At least I do. By the time I was up, Sandy and the kids were already pottering around. Sandy was just finishing off baking some croissants and cinnamon scrolls with icing sugar. It smelled wonderful.

We hadn’t really put much of a plan into motion for today. 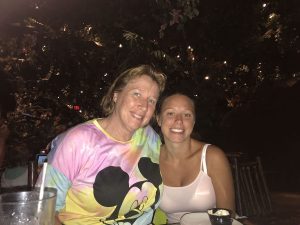 I was on the laptop and exchanging a couple of messages with Andy. It turned out they planned on having lunch at the Rainforest Café in Disney Springs before heading into one of the parks for the afternoon. I thought this sounded like an excellent idea, so I suggested we meet them – at least for lunch. They were heading to the Magic Kingdom for the afternoon while we thought we’d head into Animal Kingdom. Everyone was on-board with the idea, so we all got ready to set out for the day.

Within half an hour, everyone had showered and were ready to get into the car. Well, to be honest, it did take a bit of pushing but we did get there in the end. I quickly set up a few fastpass times for our time at Animal Kingdom. It doesn’t cost us anything. Our tickets permit us three free fastpasses per day. Once all three are used, you can book three more.

We planned on having lunch as our main meal of the day with just a snack in the evening. It was fast approaching noon already and the kids were getting antsy about not having had a full meal already. Fortunately, the drive over to Disney Springs was a short one. Once again, we placed the car into the Lime car park – pretty much exactly where we parked it the previous time as well.

It was a short walk from the car park to the Rainforest Café, where we met up with the Bissetts. Joey was being particularly challenging this morning. 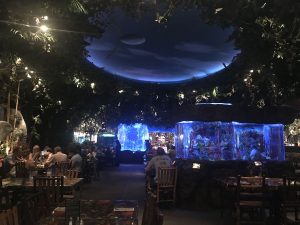 He was non-verbal and non-compliant for most of the time. We did our best to manage that. I was rapidly losing patience with him, so my contribution towards that management was to try to prevent myself from cracking the shits with him – no mean feat. Once we were all seated at our table for eight, Joey insisted on not sitting with us. I practiced my breathing in and out calmly. Fortunately, Andy was on hand to provide some much-needed diversion for Joey. Both Andy and Kirsty have been really good with Joey over the past couple of weeks. They’ve just treated him normally and given him a lot of space when he needed it. He has felt really comfortable with them. Andy spent a few minutes chatting with Joey and showing him some Power Ranger photos and images on his phone. This did wonders to bring Joey into a better mood. That said, he was still very detached and choosing to spend time on his own exploring the restaurant (it’s a pretty good décor with tons to explore). We just ignored him. Do I feel like a shit parent? Actually, no. Sometimes, there’s just nothing you can do.

The food at the Rainforest Café was very good. When it came time to check over the bill, however, it did seem awfully expensive. Both Andy and I raised our eyebrows at it. It took a while before we realised they hadn’t yet applied Andy’s DVC discount AND that they had already applied a 20% gratuity. Once those two pennies dropped, it brought the bill back into line with what we roughly expected it to be. It was still an expensive meal, but we expected it to be an expensive meal. 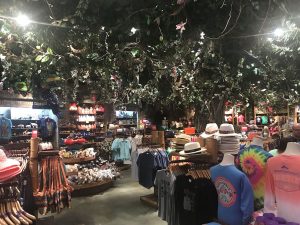 Once all was said and done, we paid $225 between us for eight.

For the past couple of times we’ve seen them, we’ve done the whole goodbye routine just in case. This is because it’s not clear when the last time will be that we’ll see each other. Once the meal was done with, we went through this routine again with hugs and kisses all around. Sandy and Joey left the building to head over to the LEGO store. Andy and I were still sorting out the bill. The three girls wanted to peruse the shop section of the restaurant, so they meandered around there for a bit. During the space of a few minutes we were all pottering around in there, the weather took a seriously swift change for the worse. With very little warning, we were hit with an intense thunderstorm. Andy and I both had the Weather Bug app on our phones. We received several severe weather and threat to life alerts via the app. It was showing numerous strikes within a few hundred metres of our position. The torrent of rain that fell was incredible. Fortunately, I managed to get some great footage. Even better was that we hadn’t yet left the building and were thus all safe and sound inside. Sandy and Joey messaged they were safe inside the LEGO store as well.

The storm lasted a good forty-five minutes before the rain began to subside. By this time, Jennifer had convinced me to buy her some putty slime, although only after I made her promise (on camera!) that she would not use it anywhere in the carpeted areas of the house.

Andy, Kirsty and the girls eventually made their way back to their car. Jennifer and I went over to find Sandy and Joey. 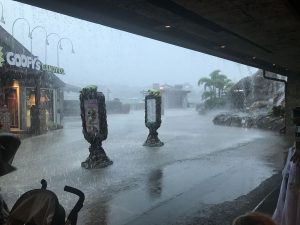 Joey was in a rather odd mood. Ordinarily, putting food back into him would improve his mood but he seemed genuinely unhappy about something or other. Sandy had had her fill of him by now, so we agreed to swap kids for a bit before she lost her shit altogether. I managed to pry out of Joey what his problem was. Evidently, Sandy had said something to the effect of ‘If you don’t buy that thing (whatever it was), that would be more money you potentially would have to buy LEGO’. It was probably an attempt to dissuade him from buying something of little value but in his mind, it was tantamount to a promise of more LEGO. As I was feeling somewhat benevolent (a full tummy will often do that to me), I decided I’d splurge a little and pick out a particular LEGO set he was anticipating on getting. Amazingly, he was in a much more compliant and agreeable mood after that.

Unfortunately, for me, Sandy already had planned on getting Joey this particular LEGO set with a view to giving it to him on the cruise in a few days’ time. Despite me not being made aware of this plan, the fact it was now scuppered was, of course, my fault…and she let me know it. I’m thinking of re-doing the ceiling in the kennel, by the way.

We finished with all our LEGO and Disney spending – including a new T-shirt for me – and made our way back to the car. Since we had been delayed by the earlier downpour, I took the time to update our fastpass times via the Disney smartphone app. 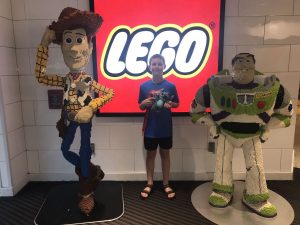 It’s great that we can do this, but the app and corresponding back-end systems are both buggy and laggy. It’s a continual frustration each time I use it.

We made our way over to Animal Kingdom and found a slot in the car park for the car. We didn’t get out. We spent the next fifteen minutes glued to the Weather Bug app trying to figure out whether the rain was going to stop. The app had been continually updating its predictions over the past hour. Each time we looked, the prediction got direr. After a bit of cabin fever set in (and by this, I mean Sandy was getting annoyed – at me – at sitting there doing nothing) we decided to cut our losses and give up altogether on Animal Kingdom for the afternoon. We instead left the car park and went home.

To be honest, a bit of a relaxing late afternoon and evening was probably a good call anyway. We chilled out at home for a bit before I went out to bring back some MacDonald’s for the kids.

We considered our options now that we’re approaching the end of our two-week all access Disney pass. We want to do the Magic Kingdom and Animal Kingdom both one more time – even if it’s just a half day each. I think we’ll then be satisfied that we’ve well and truly ‘done’ Disney for this trip.

Once the kids were off to bed and I finished my laptop duties (photos, video, blog, etc.), Sandy and I were both off to bed.